If you encounter a dispute involving leakage, alleged design or construction defects, or other construction-related problems, consider the following:

We practice the art of winning people over to our side by presenting them with reliable facts, without giving in to unreasonable demands. We have had repeated success in building credibility with hard-boiled skeptics.

Solve the technical problem, and you end the dispute. 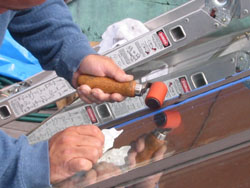 Leavitt Associates was contacted to resolve a problem in a recently completed condominium. After a long and arduous construction process, the last thing the owner, developer, and contractor wanted to think about was a construction problem. Unfortunately, there were leaks in a skylight, that had not gone away, despite several good-faith repair attempts.

The repair proposed by the glazing contractor was expensive, and it required extensive work within an occupied unit, so a stalemate ensued. Leavitt Associates was called in to propose an alternate solution that would be financially possible as well.

We studied the existing conditions and developed an effective, long-term solution, that could be installed from the exterior, without scaffolding inside the occupied unit. We got the parties to agree to the solution, hired a contractor to implement the repair, supervised the work, and water tested the completed skylight, for a cost that the developer was very willing to pay, including our own consulting fee. The owners were satisfied, because their problem was solved.

Gypsum roof decks manufactured in the 1920's frequently contained asbestos fiber. Before re-roofing this university building, we checked a piece of the gypsum deck and found that it contained wood fiber reinforcement, not asbestos.